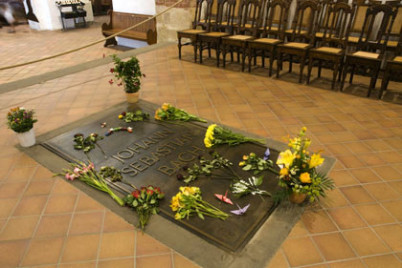 Honor to whom honor is due. It needed many, many decades until Johann Sebastian Bach was buried at a place which matches his genius. No doubt, he was and is one of the greatest composers of all times ... if not the greatest of all. That is why his grave is the first photo here.

Honor To Whom Honor Is Due

It is a still very small group of Bach lovers and Bach music lovers in the whole world, who joined the project around Johann Sebastian Bach, to make his life and work even more famous all over the world. "Bach on Bach" is a whole different appraoch, compared to the efforts of many more institutions which have the same goal primarily with Bach's music or offer aspects about the life of the composer from Thuringia in the Bach cities and Bach places.

With this "Bach on Bach" project in our 21st century medium – the internet – we members of THE INTERNATIONAL JOHANN SEBASTIAN BACH DREAM TEAM offer a large portion of excitement, fun, knowledge and appetizeres of Bach's music. However, without the following folks – friends and family – this project would have never become, what it is today, and what it will become in the close future.

Thank you, guys, so much

Members ... and Cities in the Background

The cities and places in the background of the photos regarding the following Bach fans are not necessarily representing their home towns, but often show – in particular when it's about far away countries or continents – the person in the pic with the country or the continent, in which he or she lives. And that is accomplished with the well-known landmarks of that area. 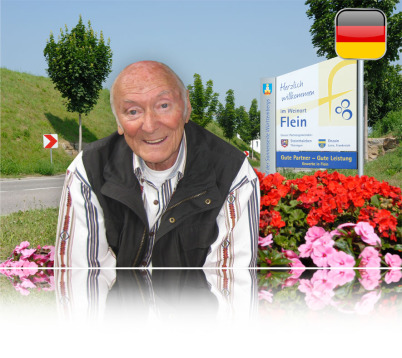 Peter Bach Sr., my Dad, was part of the project for 5 years and was a consultant in that time from the very beginning. He was the one who was handed down the information about our relation to the family of musicians ... via his father back then. A final common project, after we worked together for 30 years – first to present a combination of slides, music and narration via audiotape about South Tyrol, Bavaria and the Black Forrest, later we produced image films for newspaper publishers all over Germany – was the common creation of a Bach tin figure. Namely, of Johann Sebastian Bach, the monument in Eisenach ... as a tiny exciting, dreamlike painted work of art. My Dad died in July 2017, and we would have loved to present the numbers of visitors on our websites in the oncoming years and with that we would have made him very excited and proud. 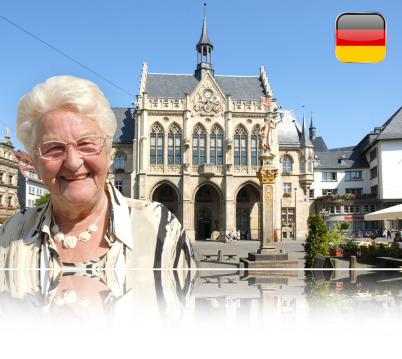 Mrs. Helga Brück, what an adorable person, Bach scientist, and a Bach book author. She discovered the most important US Bach branch. Without Helga Brück from Erfurt we would have never ever found him: "... our Zacharias ..." – without whom we would have never filled the most important gap in our family tree. We found him on her – how she called it – "treasure", a 12 feet wide paper family tree of the Bindersleben branch of the Bache. Mrs. Brück has died surprisingly in August 2013. We had planned to have much more common fun dates together with her, and we will value the time together limitless into eternity.

Renate and I are so excited about the results of our request for help from all of our friends and family around the globe because without their support this portal would have never ever  reached this current quality. In addition – and that is frank and honest – what we love too, is this international communication with really exciting folks: with Elena in Kiev in the Ukraine, at the same time when we had correspondence with Xi in Beijing in China. Anyway we talk and mail and Facebook with our friends and family in the United States and more folks help us here in Germany, of course. Our "life with Bach" has become even more exotic, more exciting and much cooler. For such thing: a big thank you as well. 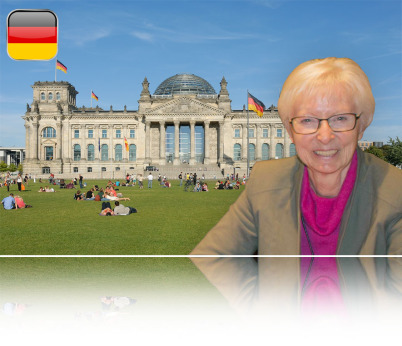 My big sister Petra-Ines in Berlin. Without her sugar sweet paintings of Vitus and Balthazar our Bach biography for children would have never come into being. Thank you, thank you. Only with these cute pieces of art our little cool book project is complete. 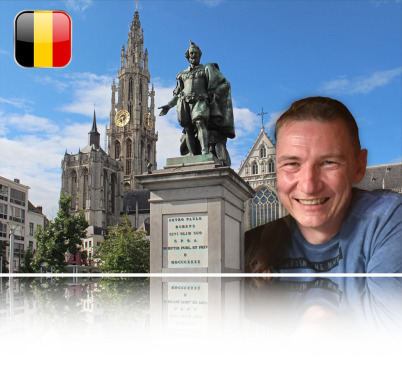 Peter Fielding is a skilled multi-discipline creative artist, and he is the author, director, painter, animator, sound engineer, voice over artist and marketing expert of his Bach cartoon film "Sebastian". What an enrichment in Renate's and my life, that he found us in January 2019. Peter is born close to Antwerp, in Flanders, in Belgium. If you like to meet his wife, click here. 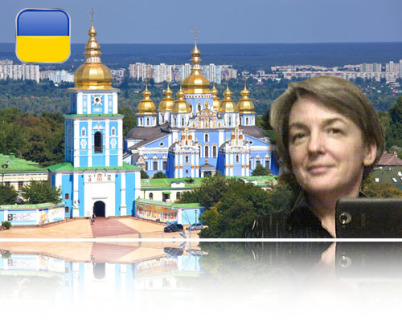 Elena from Kyiv, Ukraine: What a surprise, what a pleasure. She found me and "Bach on Bach" and my request for help on the internet. She translated for us and – I almost couldn't believe that much luck – not only for the Ukrainian version but for the Russian section as well. That is just ... wow! Thank you so much, Elena. By the way, Kyiv is Kiev in English. 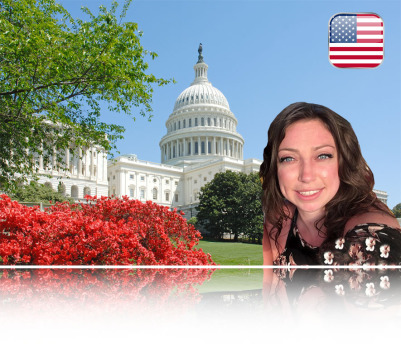 Briana, living in Virginia – neither in the Capitol nor in the White House in Washington – was help from the very first hours of the project. She was the artist who painted Johann Sebastian Bach in blue shades like I hoped she would do for me. I was excited by a painting of blue shades rabbits and I wanted artwork in that style, too. What came out impressed me so much, that we decided to make this Bach portrait the head of our major website. Plus Briana painted for me – in perfect cooperation – the many drawings of Bach's life episodes which are a Bach coloring book today. Thanks, Briana for so much expertise, time and effort. 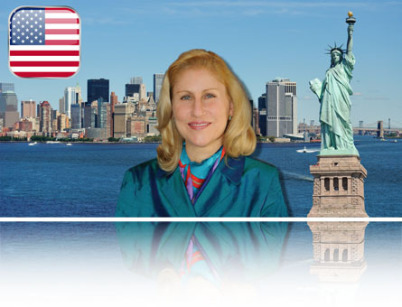 Susan: Thank you so very much for helping so fast and always and for translating a really early request from my C-grade-English into A+ English in the international section. However, from you as a book author, in particular, a book author for children I got the best support ever. Thank you, my cousin, so much. We both value not only the ongoing friendship of you three sisters, but we also adore your whole family around as well. 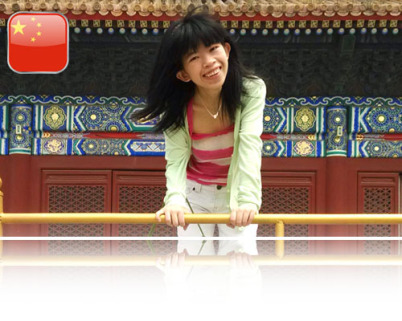 What a pleasure it has been. Thanks, Xi for so much for our correspondence and so many steps together. You found us on the internet, and you translated so much, really much. Two Chinese versions (... the back then the path, which changed in the meantime), when the INTERNATIONAL SECTION was in its infancy. We both loved every single mail from you and talking to you on the phone – in German – was always exciting. Later you brought life in Beijing, China much closer to us in your emails, and we enjoyed it much. Thank you, Xi, thank you so very much. 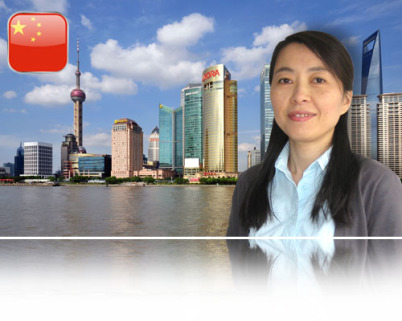 What a result, which makes us still proud today. With your help! Jiang, thanks to your help we managed to present the only Johann Sebastian Bach short biography as a video with stills, film, music, and narration in the Chinese language. Thank you for your translation and thank you for being so kind and courageous to narrate it all as well, although you had never done such a thing in your life before. Plus the circumstances were more than challenging back then. You ... did a fantastic job. Thank you again. 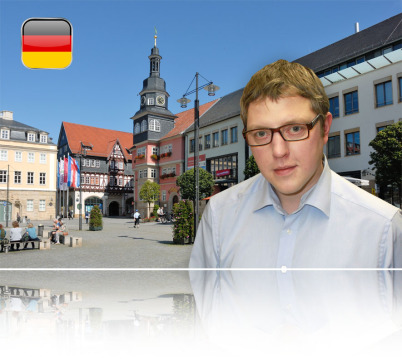 Christian, a friend of the first hour! Discoverer, scientist, Sütterlin expert (... what the heck might that be?). Here at this place is a real warm thank you for your support – again and again – and very compact in the beginning. Without your help the project would – maybe, just maybe – never have become the project as it is today. We are pleased about every oncoming common step. Thank you, Christian. 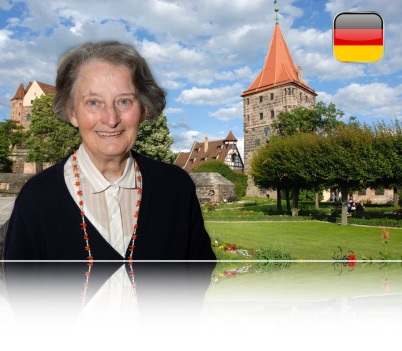 Dear Evelin, we had the luck to meet before you had to "leave" and so we spent a tiny fraction of all our lives together. We had a lovable correspondence. One highlight was the common appointment when you received the Federal Cross of Merit for your Bach success after so many years and decades in Schwarzenbruck close to Nuremberg. What an honor among Bach fans to be part of this ceremony. We are so thankful that you handed all your Bach research to us, and we never will forget the pleasure together. It's a pity, that we were not granted but a few dates, during which we learned much about your achievements in the subject of Bach. Thank you so much, dear Evelin.

A Bach "turning box" from the Ore Mountains, a Bach calendar from the publishing house "Bach 4 You". 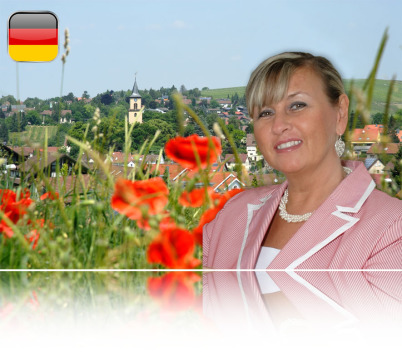 Sure, we both talk together about all aspects around the subject of Bach, however – strictly speaking – I am the author of all websites, and she is my publisher and owns a publishing house (Bach 4 You). But together we are this Johann Sebastian Bach Mission. With that we are of course two members of the JOHANN SEBASTIAN BACH DREAM TEAM as well ... with equal rights (... what that means? ... Actually ... nothing at all). In particular the Bach genealogy is Renate's hobby inside the hobby. So she actually researches my family. With that said, mouse, thank you so very much. I rarely call Renate Renate ... by the way. 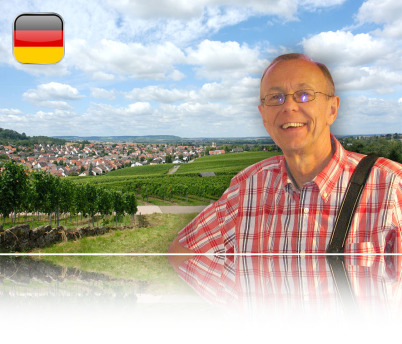 Plus ... finally it's me ... I know, it's I. To learn more about me, is very easy, if you read and "dig" through hundreds of website pages. After that you actually "really" know me: the funny maker (... not a comedian), the one who has always these gigantic plans, and I am the one who loves writing so much, who actually loves writing that much so much. 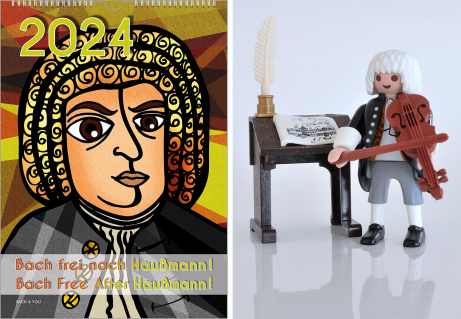 Two music gifts: Of course there has to be a cool Bach calendar on this page, too. Bach calendars are perfect gifts for musicians. 3 sizes, 2022 + 2023. US + EU style. To the shop.