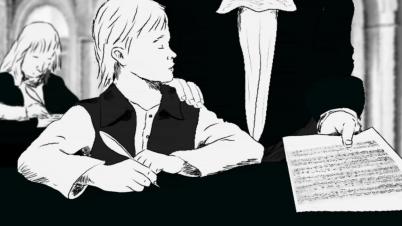 The Johann Sebastian Bach cartoon movie: Enjoy a trailer right here, later on this page and after that look forward to watching the first accomplished episodes and many more coming in the years 2019, 2020 and 2021. 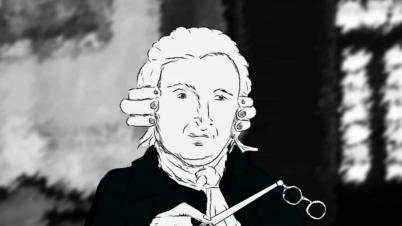 The Bach cartoon movie, that portraits Johann Sebastian Bach's life. It's created to be something special for Bach lovers. Learn more about the challenges of this unique composer from Thuringia in Germany. Plus about the challenging persons in his life, such as teachers, bosses, a few students, town councils, noble folks, prominent citizens and colleagues. And...  well, it's not a biography, but a fiction series!

Too Much Honor - Peter Did It All Alone

If you check on the production hints in Peter's Bach cartoon movie episodes, you will find my website's name as the production director of all of his episodes. Actually it's a much to gigantic thank you for just a few tips, which I sent to him. However, I fell honored but I have to say, that nothing, really nothing is created by me. Not they idea, not the research, and of course none of the production disciplines. Not the title, not the subtitle. Maybe, it's just a way to big thank you for promoting Peter here on my website. I find, it's a real cool work of art and the most amazing thing actually is, that Peter created this whole master piece - the Bach Cartoon Film - as a "one man job"!

You get to Peter's channel with a click here, however, make sure, you start with episode one! 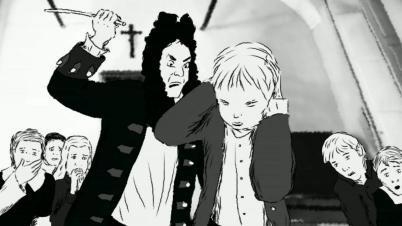 The Johann Sebastian Bach cartoon film: More than 50 episodes. Learn, how the unique composer and star musician mastered to live his life and to meet so many important persons on the Thuringian's path to an unmatched musical perfection and unique music work.

What a gift for musicians: a cool music calendar, a great composers calendar, a real Bach calendar. It comes in 3 sizes, it comes in European which is poster style and you get this cute this year plus the following year. Click here to the shop.

The Cool  Bach Cartoon Film, that Doesn't Want to Be Just One More of Roughly 7,000 Existing J.S. Bach Biographies Since 1750

This Bach cartoon film with the title "Sebastian" wants to be different than some 7,000 Bach biographies are. And that is why the whole story of Peter Fielding, a multi-artistic talent doesn't start on March 31st of the year 1685 (... J.S: Bach's birthday), but on March 3rd of the year 1695, when Johann Sebastian Bach's beloved father died. And that was shortly after the future composer's mother had died. That is how the story, better the Johann Sebastian Bach cartoon movie starts like none of these 7,000 Bach biographies in way more than 250 years since Bach's death in 1750.

The Johann Sebastian Bach cartoon movie "Sebastian". Get a first impression in quick 1.5 minutes. You will love it. After that here are the shortcuts to episode 1, episode 2 and episode 3. Enjoy!

Can you believe such a thing: Peter Fielding did not only study Bach's music, perform Bach's music and knows way more than the author of this "Bach on Bach" website, he also wrote the script for his 50 episodes Bach cartoon movie with the title of "Sebastian". Beyond that, he is the artist, who creates all the needed cartoons, animated them after teaching himself how to use the animation software, cares about the text and decides which music piece matches this situation and that situation. After that Peter even performs Bach's music pieces to embed them in his cartoon movie. Finally, he manages to find all the additional sounds that play a role in his movie like "the murmur of a crowd", church bells and much more. All created by one artist. My high regard for such a multi-talented person and I am proud to call him a friend. Of course, he now is a member in the JOHANN SEBASTIAN BACH DREAM TEAM.

Peter Fielding was born in 1969 in Flanders, Belgium, but spent much of his life in England. He later moved to the Italian Apennines where he met his wife Barbara and where they’re living happily together with their five cats and where he teaches English at a couple of middle schools. 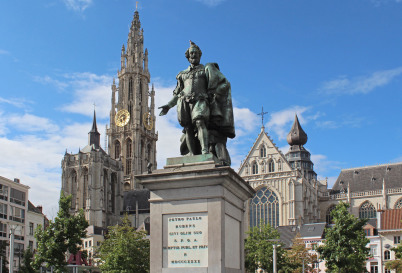 Antwerp in Flanders, Belgium. Antwerp is not the birth place of Peter, however, this pic stands for his birth country and birth region. 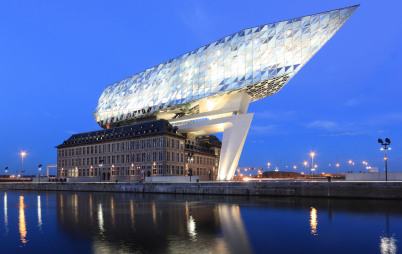 One more impressing picture with two landmarks in Antwerp, in Flanders in Belgium, the region where the Bach cartoon movie artist is born.

Bach 4 Ever – A life Full of Music

Instigated by his father, he became passionate about music from a very young age and intensively studied music theory and the piano, which he still plays on a daily basis. Also, from the very beginning, he preferred the absolute perfection of Bach’s music above anything else. “There are many musical works that trigger very deep emotions, but none cleanse the mind the way that Bach does”. 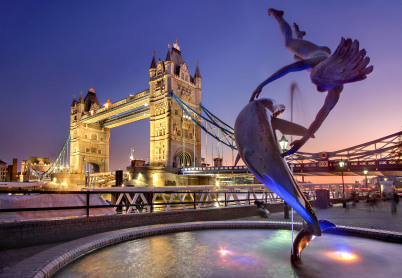 Peter Fielding, creator of his Bach cartoon film project spent much time in England. However, he didn't live in London, but that's a picture of the Tower Bridge and this stands for Peter's time in his life in London. 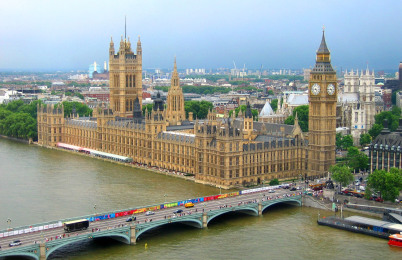 Another great pic matching Peter's time in England. A long time is what Peter needed to develop, how to create something really new about J.S. Bach. What came out is his Bach cartoon movie, so different from all other publications about the Thuringian.

A First Try Finally Led to a Unique Result: The Only Bach Cartoon Movie on Earth

Peter has always felt disappointed that Bach, who created more masterpieces than all other composers combined (... without even mentioning that about half of his work got lost forever), receives so little attention in comparison and that the general public erroneously believes that Bach’s is “difficult” or “merely technical” music. In 2009 Peter started writing a novel, a fictional story about the life of the great master. Being autistic, however, he had to face serious difficulties trying to express his thoughts into readable text and after a first approach to write "just another Bach biography" like so many works in so many decades were published, he found his way to create something exceptional and really new, which will find its way into the hearts of many humans, even those, who don't know the master musician and Royal Polish and Electoral Saxon Court Composer not yet.

What a landscape: The Apennines in Italy. However, this village in the picture is not, where Peter and his wife Barbara live, it's just a great picture to show you how romantic this place on earth – the Apennines – is. 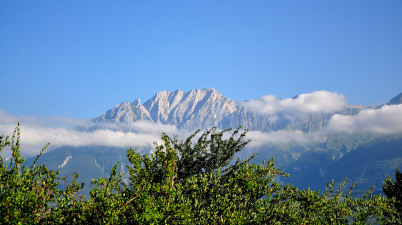 Who wouldn't love to live here?! Isn't hat the perfect place to get all the inspiration to create a work about Bach, that is unique in the world? Here is where the biggest portion of the Bach cartoon movie will come into being.

Decades of Reflection and the Result: The Only Bach Cartoon Movie in the Universe

There was a break between the day when Peter stopped to write about Bach like so many others did before him. A long break, actually a super long break. For nearly 10 years, the project about the fictional Bach story never left his mind and nearly ten years later he decided to try a different approach: telling the story in a series of cartoons. It turned out to be a daunting task because every episode, about seven to nine minutes of video, requires six to eight weeks of hard work to accomplish. Nevertheless, it turned out the right way to go and even though the entire project might require as many as fifty episodes, Peter’s determined to continue all the way. 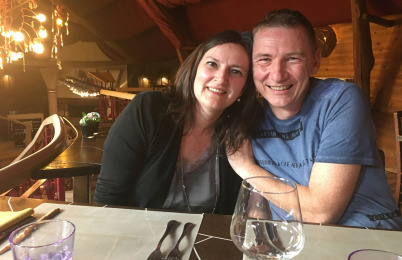 Welcome, Peter and your wife, to our Johann Sebastian Bach Dream Team. How good, you found me and I can help to spread your cool cartoon movie "Sebastian" to all of my visitors on this website. Thank you, how nice to meet you. 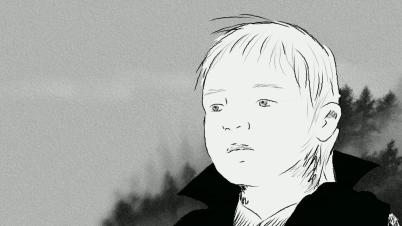 The Bach Cartoon Movie No. 2 – However, Sorry Folks, It Is in German Only 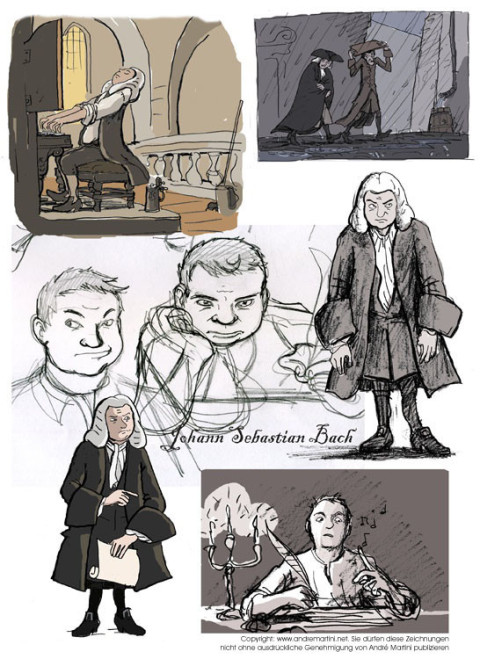 André Martini (www.andremartini.net) is a draftsman and Katja Uhlig is the producer of a unique project: The story of Johann Sebastian Bach as a cartoon.

There is something in the making, which has never been existing before. Not in 300 years. However, it wouldn't have been possible to create such a thing in the last three decades. It is a cartoon on the theme Johann Sebastian Bach. Where else, but in the Bach city of Leipzig could such a thing happen?!

The Team around producer Katja Uhlig, who offers product videos and image videos in Leipzig successfully and draftsman André Martini have already accomplished a great part of the path and the most rocky part of the way is completed. Folks are actually excited in the music metropolis of Leipzig and so both the Bach archive and the Stadtgeschichtliche Museum support the project. And nobody less but the mayor is patron for this project. Of course more specialists are involved to be part in creating the work of art. It's a whole team of young specialists, who contribute to the success. So the drawing do not only have to be drawn on paper, but they have to become animated in a complex. The sound recording has to be professional and it goes without saying you listen to the music of Johann Sebastian Bach. Matching to the topical scene - of course. 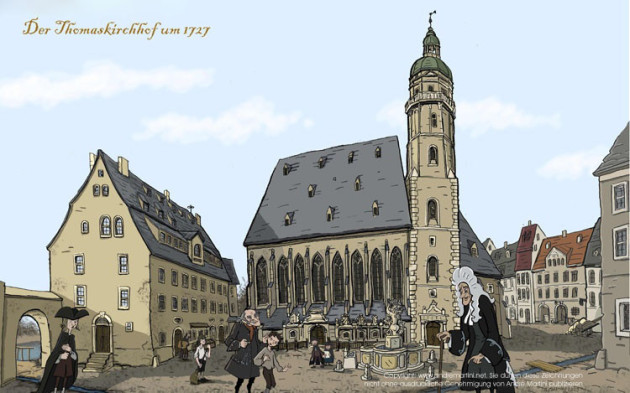 Drawn with love down to the detail and animated with brillance. Hollywood from the captital of Saxony, Leipzig.

With Crowdfunding to the Bach Success

One option to fund a creative project hasn't succeeded yet in Germany like it does in the United States of America, but anyhow the team around Uhlig/Martini managed the financing with a group of fellow campaigners. Crowdfunding is the funding of money via a so called community of backers. These are mostly internet users, which would like to see this and that coming into being. For instance this little Johann Sebastian Bach cartoon. And supporters pledge smallest, small and sometimes even a bigger amount of money, so the project is going on. Crucial corner pillar are little gifts, which are offered by the project team to those who support. Because it's absolutely not sure, that the team is successful to collect the wanted amount of money, there is a escrow bank involved. Because this back hands back the donated money to the pledgers, if the goal, which is the sum of money, is not accomplished, that is to say the project as a whole fails. 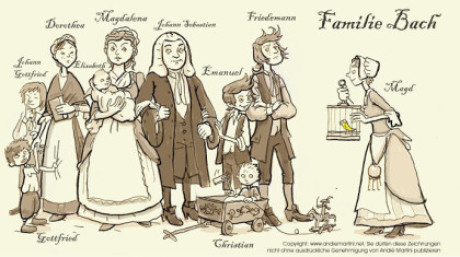 Johann Sebastian Bach would have had much fun: a drawing of expert André Martini. Just one out of thousands for the film of Katja Uhlig.

Sucess With Bach Thanks to Startnext.de

In Germany the company "startnext" is the most successful crowdfunding platform and Uhlig and Martini have accomplished their goal with that institution. The amount of € 4.500 was collected and now the actual work on the project started for the team around the company Eventfilm and Katja Uhlig, the CEO. A small trailer with the title "Singing, Praying, Halleluja" gives you a first impression, what a worldwide Bach Fan Community might look forward to. There will be an English version later. News and progress on the project is what you may find via the source, which is Eventfilm, that goes without saying, and from André Martini or  – you know it, here via "Bach on Bach". And that is on the very day, when it happens. Of course, you may buy this DVD. The title by the way about the brilliant tone setter of the baroque is called "Requiem – Johann Sebastian Bach and The Thomaner".

"Singing, Praying, Halleluja" is a dreamlike trailer of the production team around Katja Uhlig and André Martini. If this cartoon is a success in German, no doubt, an English version will follow. Until this happens: visit the German version – even if you don't understand a word: it's really worth it. 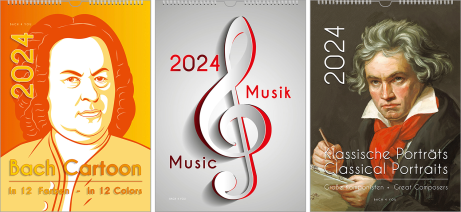 If you are Bach fan, then these 5 Bach shops are perfect for you … learn more.