Which Titles Did Johann Sebastian Bach Receive During His Life?

Firstly we have to find a definition for the term "title". Or we decide, not to judge too hard and mix actual titles and names for professions. If we do so, Bach had the following "titles".

The First title surely was the organist of the New Church in Arnstadt. This time was followed by the same tile or job if you will, at the Divi Blasii Church, St. Blasius Church in Mühlhausen. In Weimar at the court of Duke Ernst, Johann Sebastian Bach became Concert Master after many years. Not earlier than in Köthen Bach finally became band master. And he called himself music director there. Sovereign Leopold made him an Electoral Anhalt-Köthen Band Master. Bach still held this title, when he was working in his next job in Leipzig later on as a Thomas Cantor, which by the way was his next title. 1736 finally he received the highest honor and was ennobled by the Polish King in Dresden as a Royal Polish and Electoral Saxony Court Composer.

So Many Music Wall Calendars 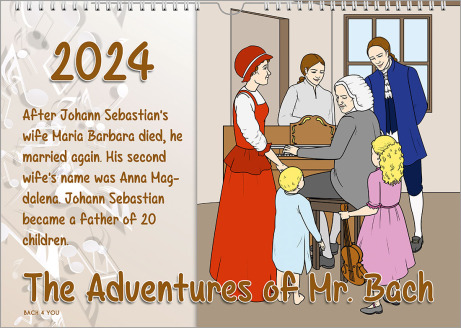