Was Johann Sebastian Bach a Hothead?

Maybe he was a hothead. It is what some biographers write. The question however is, to check whether this is true - or it just isn't. Most people and Bach scientists, musicians and biographers haven't experienced him in person. Maybe some from stories and anecdotes. Just the very first biographers, who are Bach's son Carl Philipp Emanuel, Bach's student Agricola and Mitzler de Kolof knew Bach. But they never have been present at such an event. They, too, had to be satisfied with stories about these occasions. Carl Philipp Emanuel however knew his father and he mentioned nothing in his necrology. Actually all of Bach's sons only talked good about their father. The second biographer didn't write his biography as late as fifty-two years after Bach's death. This was Johann Nikolaus Forkel.

Bach wasn't an easy person. Never. He didn't back down fast. He complained early and insistently. He maybe, but just maybe complained inappropriate in loudness and manner. This is why Duke Ernst imprisoned him in Weimar. Because of "stubbornness". However on the other hand: do we know whether the duke was absolutely wrong with treating this super musician? Bach left Arnstadt, because things didn't work out with the council of Arnstadt, like Bach would have loved it. In Mühlhausen Bach left, however it was "with the blessing of the council". In Leipzig numerous general controversies between several parties led to the situation, that Bach complained often and officially.

Conclusion: to censure a student with the scurrilous term of "Zippelfagottist", to tell his duke what he thought, when he didn't talk to Bach nor let him go. To throw a peruke after a student who was disturbing – a peruke isn't a missile by the way – that lead to the general opinion, that Bach was an angry and explosive contemporary. This picture, maybe a wrong picture, probably will remain into eternity.

Few biographers had a different opinion and measured the grade of these few events, which are handed down, to the fact that back then genius met everyday situations. Just imagine, there would be world-famous musician today who is forced into dealing with students that are not even able to sing one note. Bach had to do exactly his. And that was not for years, but for decades. Don't you believe, the calmest person looses his or her temper, when the situation gets too bad? I do. 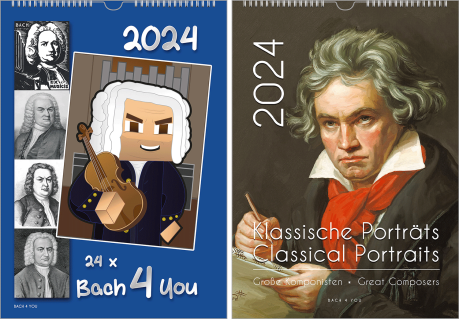