How Did Johann Sebastian Bach Meet His First Wife?

Originally Maria Barbara Bach lived with her parents in Gehren. Her father Johann Michael Bach was an organist there. Gehren is located some thirty miles from Arnstadt. Johann Sebastian Bach worked in Arnstadt exactly in the year, before he married Maria Barbara. The question however, where both met is unclear. There are four options, theoretically. The first option is, both met, while Maria Barbara visited Arnstadt to listen to a concert or to visit the service, where Bach made music. You could assume that she once was in Arnstadt, if you do believe that Bach permitted an "external damsel" to sing in the church, and it was her. Some assume this actually was Maria Barbara. On the other hand it's handed down, that actually it was an external damsel as Maria Barbara was known in Arnstadt. The third possibility is, that Johann Sebastian Bach met her in Gehren. And finally a fourth option is, that he met her for the first time on one of the many family meetings, which have been taking place regularly every year. Finally and a fifth possibility is and other sources tell so, that Maria Barbara actually lived in Arnstadt, when Bach worked there, and so they met one day.

However, Maria Barbara had luck somehow too, that the daughter of Dietrich Buxtehude in Lübeck was ten years older than her. Because in Lübeck Johann Sebastian Bach was offered an exciting job shortly before his wedding. But, he could have gotten this job only, if he had married the daughter of his forerunner – and for you and me now remains open, whether it had been the difference of ten years in age, or whether he already had fallen in love with Maria Barbara or what actually Bach didn't like, when he thought of Miss Buxtehude. 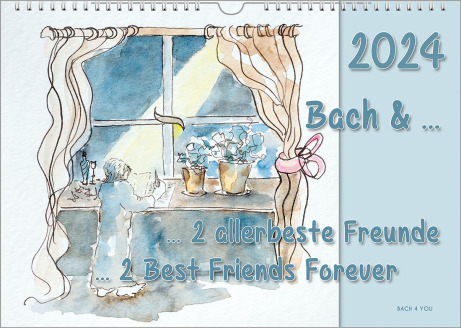