The 2023 Luther Calendar in Two Styles ... the Only One of Its Kind

It finally exists. The Luther Calendar. Better? The Dr. Martin luther Calendar. More than a decade after the mission in the matter of Johann Sebastian Bach began. And with it, shortly after, the Publishing House "Bach 4 You" also came into being. Discover this Luther Calendar on this page, were you are currently reading, or click to the shop, where you can buy it, plus explore the monthly sheets there. This calenar is one of the affordable calendars of "Bach 4 You" and it comes in three sizes. Of course you will learn about the three prizes there, too. Now to the shop? 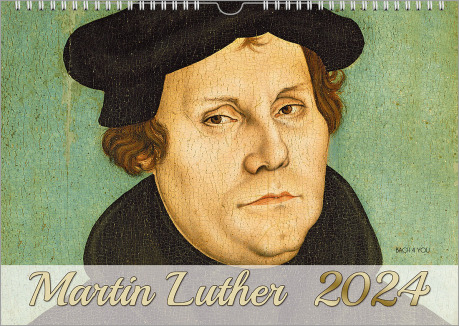 Certainly the most famous motif of Martin Luther: We have decided to place this work of art from the atelier of Lucas Cranach the Elder on the cover page of our Luther Calendar 2023. Of course, it will also appear again later as a monthly page.

How the Dreamlike Luther Calendar Came Into Beeing

Practically a whole decade have we waited for a Bach manikin from a famous toy manufacturer and we did not expect that this manikin will ever exist. The publisher even had inquiries about commissioning such a Bach manikin himself. Because that would have meant a purchase of 10,000 pieces, we ( ! ) could not only not have such a Bach figure produced. No, it was completely out of question. Then came the year 2017 and the Protestant Christianity all over the world celebrated the 500th year of the Reformation. And with it, of course, they honored Martin Luther. With a lot of very serious events and publications, but also with an adorably borderline project: That toy manufacturer mentioned above made a mini Luther. With a Bible and a quill. A Luther manikin. Many people were enthusiastic. All over the world. So enthusiastic, in fact, that this little Luther manikin became the most requested of all figures.

A relatively short time later, Bach's 333rd birthday was celebrated and what we had never dared to hope happened. Perhaps with the help of the Bach institutions in Leipzig and Eisenach, the toy manufacturer decided to produce a Bach manikin as well. Of course, it was cordially invited to our Publishing House and there you can now buy it as the "Little Bach Figure". Here your way leads directly there. You will get directly to the Luther Calendar a little later. 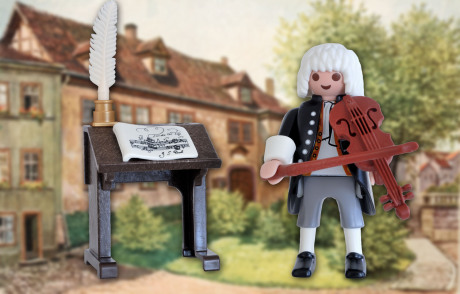 The Bach manikin on the Luther calendar page. You know the story about it by now. By the way, in the background and blurry above is the Bach House in Eisenach, Thuringia, Germany. 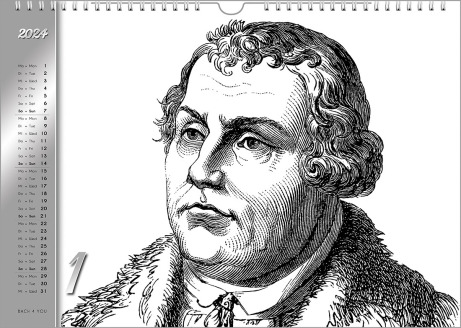 January in the Luther Calendar 2023.

You do not want to be entertained now, but want to know more about the prices? About the three sizes, whether it will still be available next year and what the monthly sheets look like? Fine. You can explore the monthly sheets below and in the store. Everything else you will find there and with a click on this link you are on the right track. 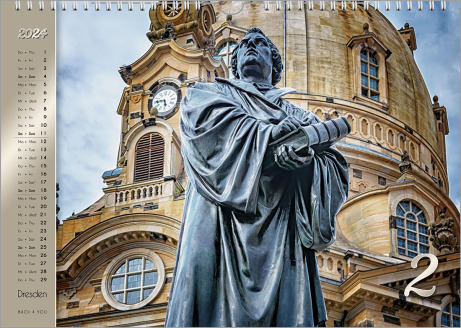 February in the Luther Calendar 2023. It is the Luther monument in front of the Frauenkirche (... Church of Our Lady) in Dresden, Germany.

It was not easy to put together an exciting Luther calendar. Because it should not be a Luther monuments calendar. And also not a Luther cities calendar. Then it wasn't clear whether we would find enough steel engravings and also wood engravings on the topic. With different content and exciting events in Luther's life. Finally, the Luther portraits: There should be quite a few. But not too many of them. After all, it wasn't supposed to be a Luther portrait calendar. Luther stamps also seemed to be an option and we had already bought one. And then we discarded it as a calendar motif. Why? The serious stamps are not beautiful ... and the colorful, cute and beautiful ones are not serious. Not serious? How can stamps not be serious? Well, many stamps on earth are printed only so that subject collectors, a "special species" of stamp collectors, "must" buy them to fully own a subject. We do that with Bach stamps. But have joy with the small works of art. Cinderellas this way, Cinderellas that way. Such stamps are not printed for mailing and mostly it is states in Arabia and in Africa and the Caribbean that issue such stamps.

Back to Luther. So it should be one stamp that was invited into this Luther calendar. But: We changed our plans and today the current Luther Calendar consists "only" of three themes, relatively evenly divided. There are the most exciting Luther monuments, the greatest and most famous Luther portraits and the most impressive scenes on wood engravings, which tell stories from Luther's life. To get all this in top quality and partly as original prints was not easy. In addition, a lot of post-processing was necessary and today we are proud to have included Luther in the circle of our composers and musicians, about 12 years after the beginning of our Bach Mission. 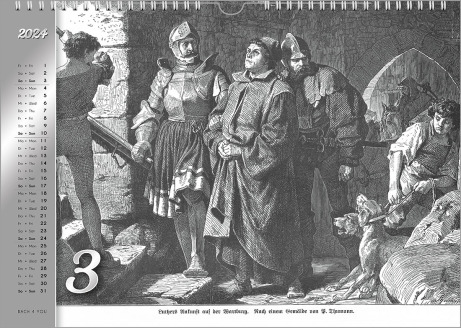 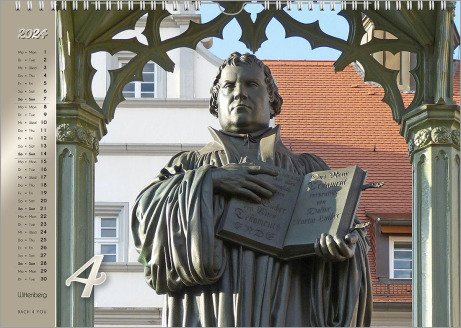 In this photo you can not see the canopy that protects the Luther Monument from rain and snow and can only guess: April in the Luther Calendar 2023. This Luther tribute is photographed in the Lutherstadt Wittenberg (... Luther City of Wittenberg), Germany. 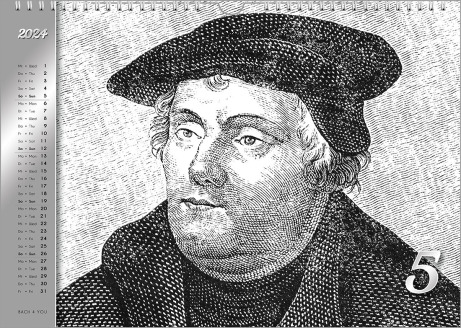 May in the Luther Calendar 2023, another portrait, this time Luther with cap. 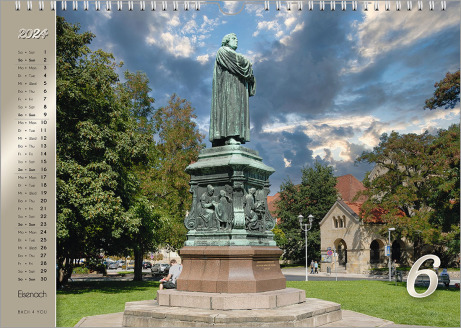 Yes, that's what we do: taking photos only when the weather is at its best. Here it is the Luther Monument in Eisenach in Thuringia. It is June in the Luther Calendar 2023. 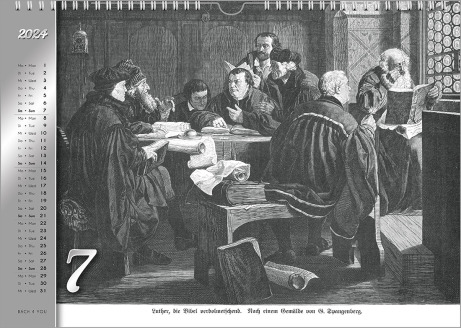 Luther "forinterprets" the Bible. That was the linguistic usage at the time. at least in Germany and maybe also in English. It is the July page in the Luther Calendar 2023. 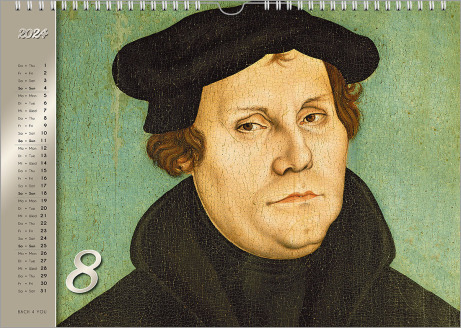 As promised: Here it is allowed once again, probably the most famous portrait of Luther from the atelier of Lucas Cranach the Elder. It is the August in Luther calendar 2023. 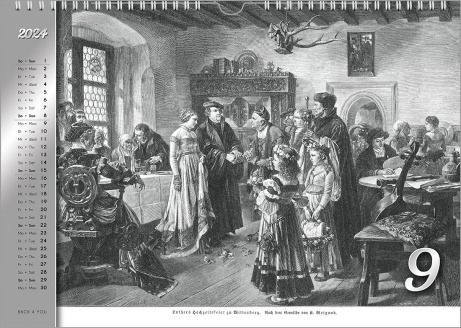 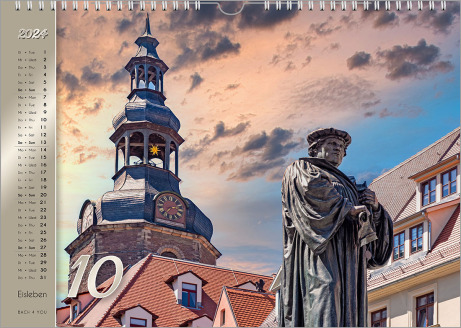 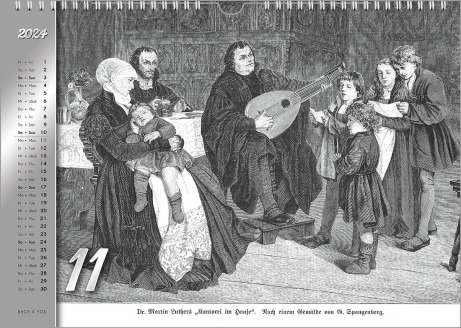 This is also one of the most famous motifs about the life of Martin Luther. It is a wood engraving, after a well-known oil painting. In our collection it is the November in Luther calendar 2023. 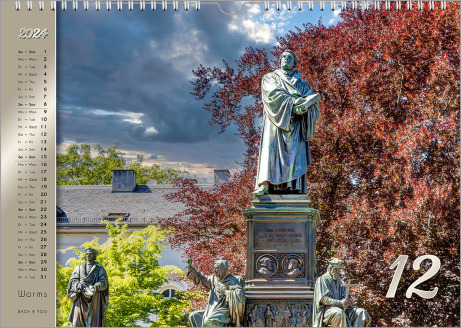 Did you know? The complete work of art above is the largest Reformation monument in Europe. Of all ten figures, you can see only four in this picture. In favor of our main character on this page of the website. This Luther monument completes the collection of great Luther motifs and is December in the Luther Calendar 2023.