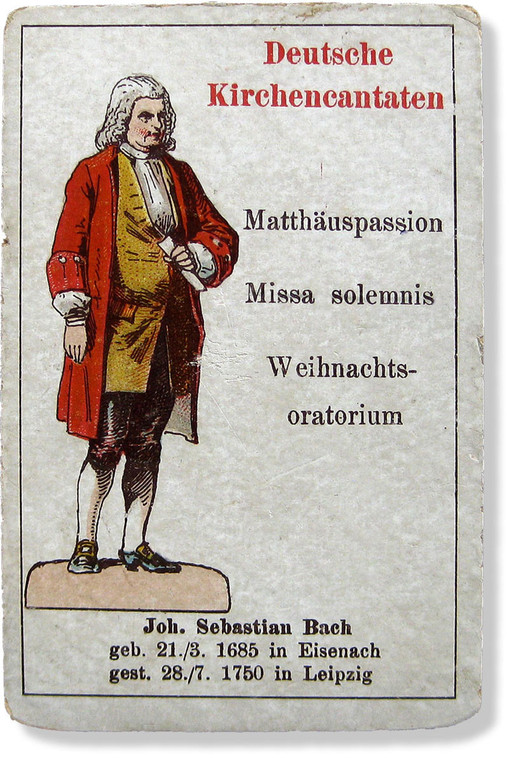 The specialty: Johann Sebastian Bach himself is the author of this so called "Genesis of the Musical Bach Family", in German it's called the "Ursprung der musicalisch-Bachischen Familie". What you see in the picture above is one of 36 playing cards of a composer card game, a real antique treasure.

The Ursprung the Musicalisch-Bachischen Familie in both German and English 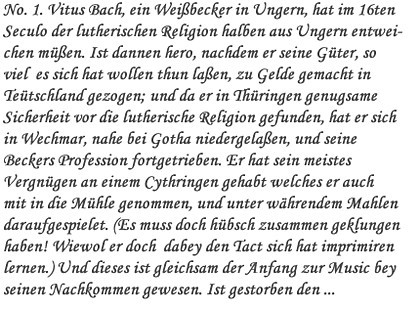 No. 1 Vitus Bach, a white baker in Hungary, had – in the 16th century – because of his Lutheran religion to escape Hungary. He has settled here, after selling all his property, as far as could get this accomplished he moved to Germany, and because he found enough security for his Lutheran religion in Thuringia, he settled in Wechmar, close the town of Gotha, and went on being a baker. He had most pleasure with a "Cytringen", which he took with him to the mill and he played on it while he was grinding. (It has probably sounded nicely together! Plus he learned to match the beat). And this is the beginning of the music of his ancestors as well. He died on ... 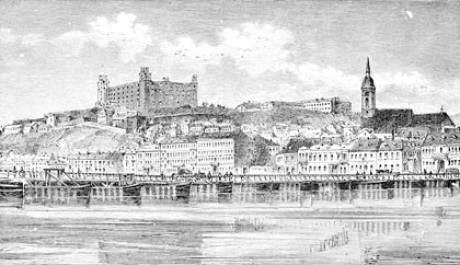 No, no, no. Veit didn't "escape" from Pressburg (Preßburg) – he came from Hungary. That is true! Pressburg – that is the opinion of just one person in the universe, a certain Korabinsky. And with his opinion, he confused dozens of Bach scientists for some 300 years. 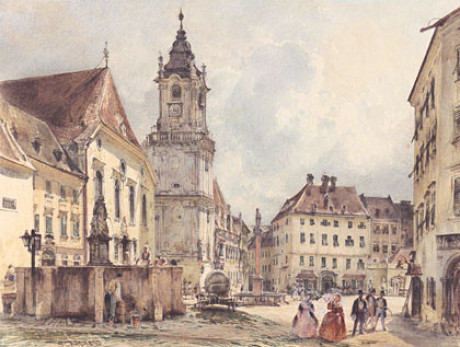 From Music Mugs to Bach Steins, from Music T-Shirts to the Beethoven Calendar 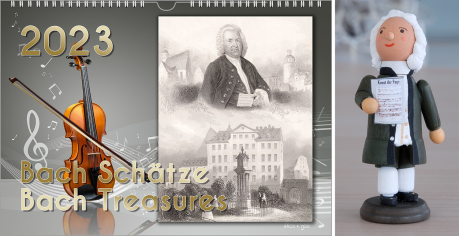 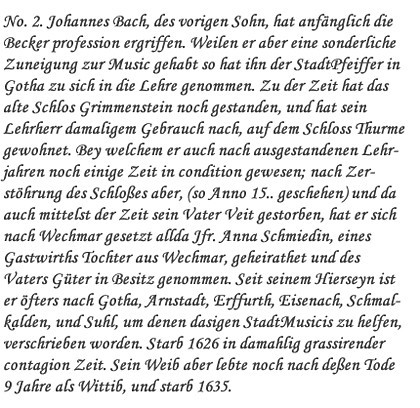 No. 2, Johannes Bach, son of the previous, has originally decided for the baker profession. However, as he had a special love for music, the town piper of the city of Gotha took him as an apprentice. Back in this time the old palace of Grimmenstein still was existent and his teacher, that was the custom back then, lived there in the palace tower, (happened in the year 15..) and because meanwhile his father Veit Bach had died, he moved to the village of Wechmar and married the damsel Anna Schmiedin, the daughter of an inn-keeper and inherited the father's property. Since he moved to Wechmar, he was ordered to the cities of Gotha, Arnstadt, Erfurt, Eisenach, Schmalkalden and Suhl to help the town musicians there. He died in 1662 in the back then contagious times. After his death his wife lived nine more years as a widow and died in 1635. 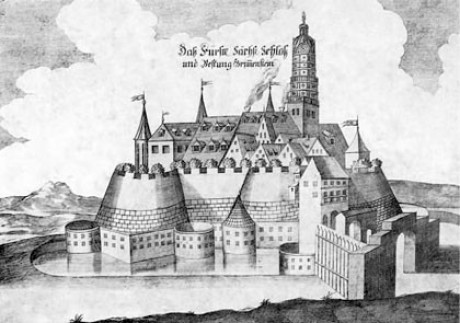 Regarding genealogy, it's of major importance: The castle Grimmenstein and the date of its destruction.

Veit saw these three castle on his way back home to Wechmar, Thuringia: the castles "Drei Gleichen" right on the door step of the nowadays Bach Stammort, which is Bach ancestral home. 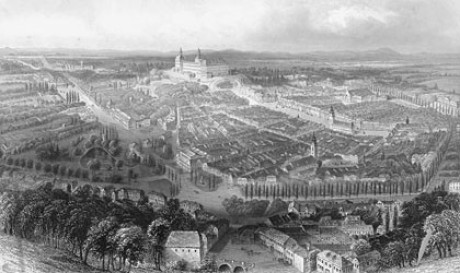 Gotha. From the right perspective you would be able to locate Wechmar in the background, that is to say so close is the place located, which is mentioned in the Ursprung with the words "close to Gotha". 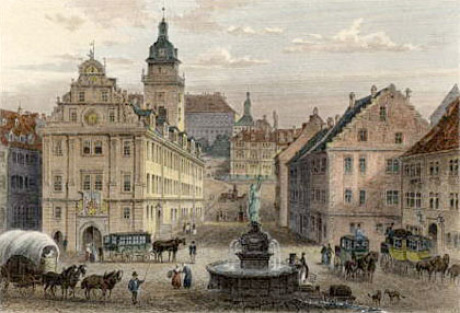 A proud city, already back then. The Bach city of Gotha. Even in back then distances Wechmar was located right on the doorstep of Gotha. Google Maps tells today: 54 minutes on foot. From city limit to community limit. 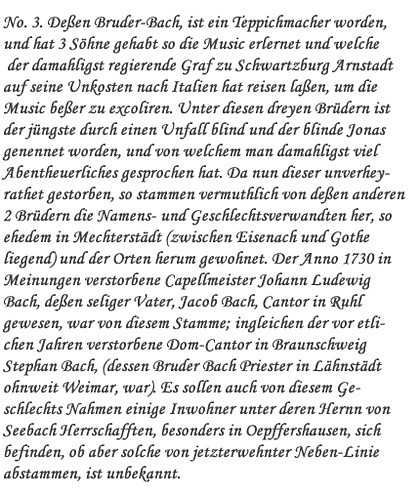 No. 3.  His brother-Bach, has become a carpet maker, and he has had three sons. He learned to make music and the back the ruling count of Schwarzburg Arnstadt sent him to Italy and paid for that, to become an even better musician. Of these three brothers the youngest became blind during an accident and was then called the blind Jonas, and they told a lot of adventurous. As he died unmarried, descendants probably result from his other two brothers name and gender relations, and they have lived in Mechtersteadt back then (located between Eisenach and Gotha) or in the communities around. The band leader Johann Ludewig Bach, you died in the year 1730 in Meiningen, whose blessed father, Jacob Bach, who had been cantor in the city of Suhl, was of that tribe, as well the many years back died dome cantor at Braunschweig Stephan Bach (whose brother Bach was a preacher in Laehnstaedt close to Weimar). It is said that some residents found of this tribe with this name lived there under the rule of the Gentlemen of Seebach Sovereignty, in particular Oepffershausen, however, whether those who are mentioned right here and now result from a side tribe, is unknown.

We read about the Bach City of Arnstadt above... 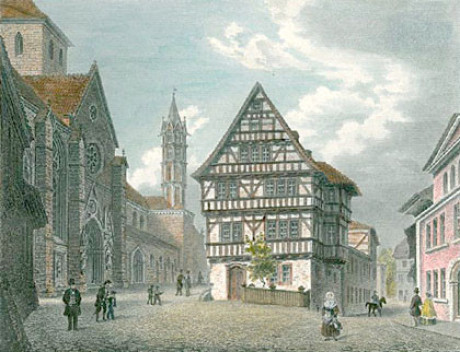 ... in the "Ursprung". And it's looking almost just like that still today. 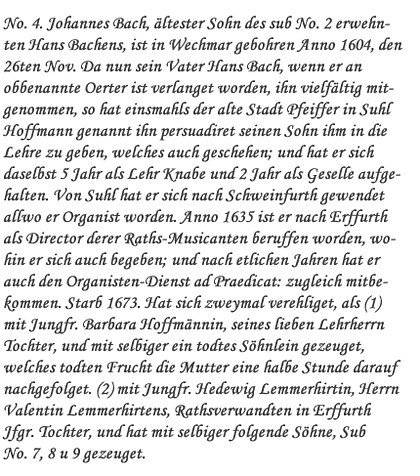 No. 4. Johannes Bach, the oldest son of Sub No. 2 mentioned Hans Bach's, is born in Wechmar. In the year 1604, on the 26th of November. Because his father Hans Bach, when he was called to the above mentioned places has accompanied him, once the old town piper in Suhl with the name of Hofmann and sent him there to learn. This actually happened, and he has been living there as an assistant for 5 years and as a companion for two years. from Suhl he went to the city of Schweinfurt, where he became an organist. In the year 1635 he moved to Erfurt as he was called as a council musician, and he went there. After quiet a few years he also received the service of an organist and preadicat as well. He died in 1673. He has married twice, when (1) with damsel Barbara Hofmann, his nice employer's daughter, and with her he fathered a dead born son, when half an hour later his son's mother died as well. (2) with damsel Hedwig Lemmerhirt, Mr. Valentin Lemmerhirt's daughter, who was Council Member in Erfurt and had the following sons with him, Sub 7, 8 and 9 fathered. 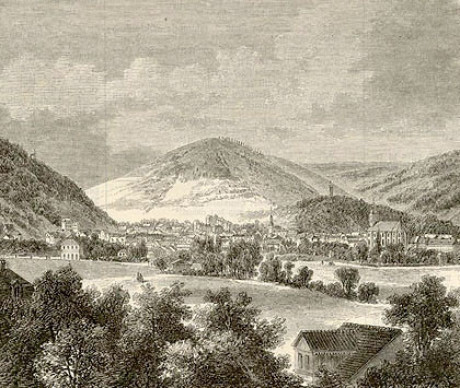 The city of Suhl is no Bach City. 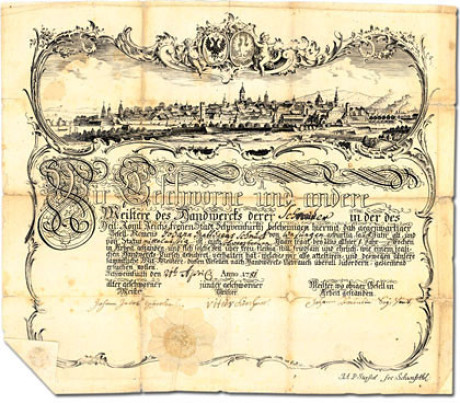 The city of Schweinfurt is no Bach Place as well. 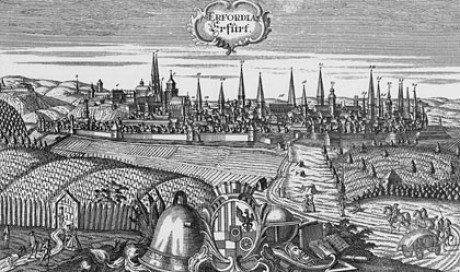 However, Erfurt is the "Bach City of Bach Cities", but no real "Johann Sebastian Bach City". Pic 1. 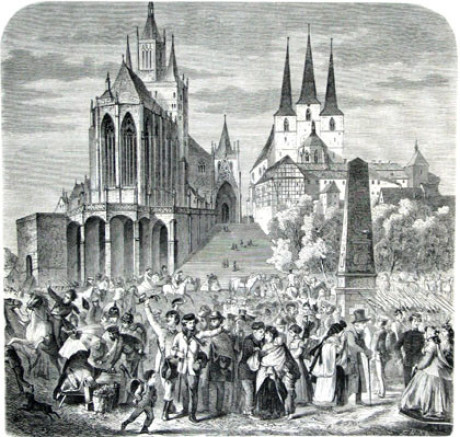 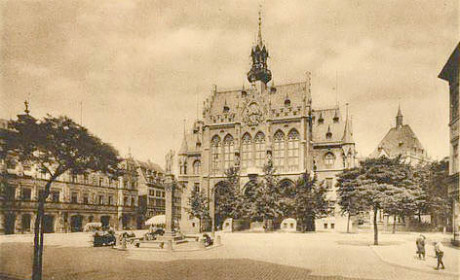 ...finally, the fourth picture of Erfurt. Erfurt is a really important Bach city. Why this is a fact? Click here to discover it.

Here you will find more Bach gifts and music gifts, than you can imagine. Plus more music calendars and pipe organ calendars. 3 sizes. 2023 + 2024. US + EU style. To the shop. 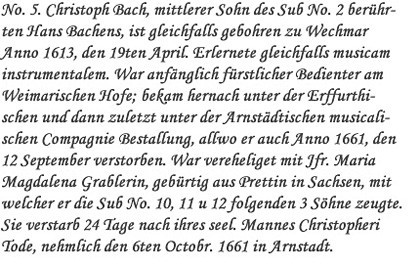 No. 5 Christoph Bach, the middle son of Sub. 26 famous Hans Bach, is born in Wechmar too. It was in 1613, on April 19th. He learned to play music instruments too. In ht beginning he was baronial attendant at the court at Weimar, later he was called first to attend the Erfurt Musical Compagnie, later the Arnstadt Musical Compagnie. He died at Arnstadt on September 12th in 1661. He was married to damsel Maria Magdalena Grabler, who was born in Prettin in Saxony, and with her he had fathered the Sub 10, 11 and 12 following 3 sons. She died 24 days after her blessed husband's Christopher's death, which is October 6th 1661 in Arnstadt. 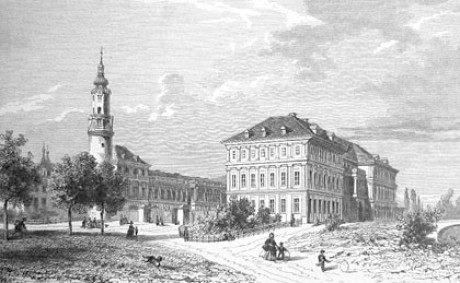 The Bach city of Weimar. 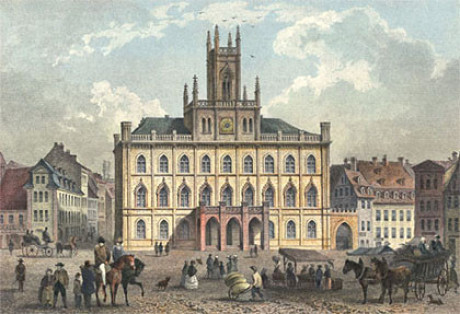 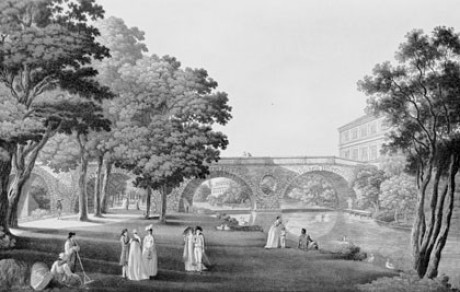 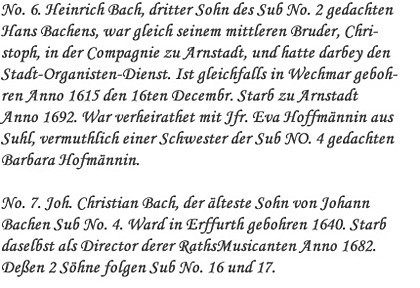 No. 6 Heinrich Bach, third son of Sub No. 26 Hans Bach, was like his middle brother Christoph, in the Compagnie of Arnstadt, and he had to handle the town organist service as well. He was born in Wechmar too on December 16th in the year 1615. He died in Arnstadt in the year 1692. He was married to damsel Eva Hofmann from Suhl, presumably a sister of Sub No. 4 mentioned Barbara Hofmann. 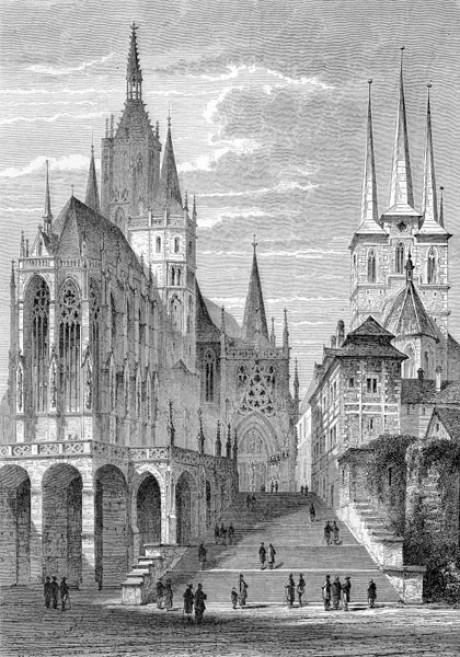 Erfurt is invited to show up in this chapter twice. That is, only the city of Erfurt is representing this town in this chapter of the "Ursprung der musicalisch-Bachischen Familie" at two places and herewith a second time. Well, it's the top Bach city among all. However, it is no Johann Sebastian Bach city: 65 Bachs is what you find in the church records of this city. And all are related to the Bach family of musicians. 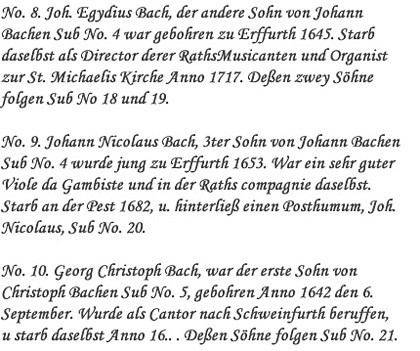 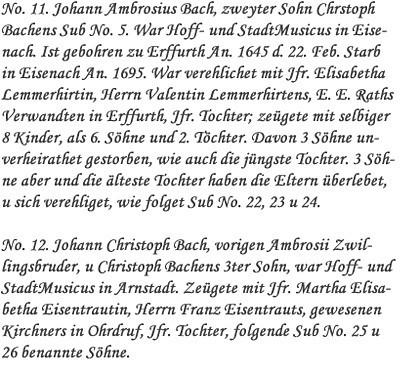 No. 8. Joh. Egydius Bach, the different son of Johann Bach's Sub No. 4 was born in Erfurt in the year 1645. He died there as a director of the Council Musicians and an organist at St. Michaelis Church in the year 1717. His two sons follow Sub No. 18 and 19.

No. 9 Johann Nicolaus Bach, 3rd son of Johann Bach's Sub No. 4 was young in Erfurt 1653. He was a very good viola player, and he played in the Erfurt Court Company. He died of the black death in 1682, and he left a posthumously, Joh. Nicolaus, Sub No. 20.

No. 11 Johann Ambrosius Bach, second son of Christoph Bach Sub No. 5 was a court and Town Musician in Eisenach. He is born in Erfurt on February 22nd 1645. He died in Eisenach in the year 1695. He was married to damsel Elisabetha Lemmerhirt, Mr. Valentin Lemmerhirt's, was Council Member in Erfurt daughter; he fathered with her 8 children, that is 6 sons and 2 daughters. Of those, 3 sons have died unmarried, the same happened to the youngest daughter. But 3 sons and the oldest daughter have outlived their parents and married, as follows No. 22, 23 and 24.

No. 12 Johann Christoph Bach, the mentioned before Johann Ambrosius' twin brother, and Christoph Bach's 3rd son, was court and town musician in Arnstadt. With damsel Martha Elisabetha Eisentraut, daughter of Mr. Franz Eisentraut who was furrier in Ohrdruf, he fathered the following sub No. 25 and 26 named sons. 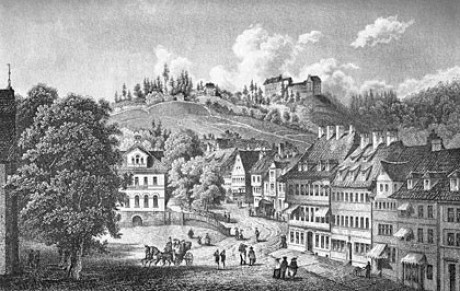 The Bach city of Eisenach. A visit of this location "in the matter of Bach" is really rewarding. 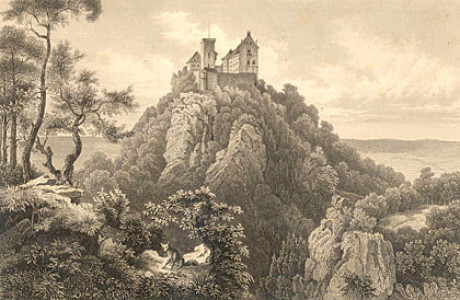 On a Personal Note

Honestly guys, this was one of the most challenging translations ever. Why is that so? As first there are old German words embedded, which don't exist any more today. Plus, you don't get the content at all at many places. Many sentence seem to make no sense even in German. The grammar back than was different. Sometimes I feel challenged not to change the wording to much, on the other hand, sometimes it's just necessary to provide you with an additional word. There are musical instruments, which don't exist anymore, so the translation almost makes no sense as this is not the place to teach you back then German language. Names had to be changed genealogically.

However, if there is somebody out there on this earth, who is both capable of German and English, knows old documents and there meaning. So actually if there is a person among those 7.2 billion humans on earth: please send me a mail and let's do it better. However, keep in mind, it's not about proper English here. As the source is no proper nowadays German. I myself could make a clear English sentence, but it's no common sense English language job, but a crossing of not changing the content, nor the grammar. What ever... thank you. At least for many folks it's easier to read than the handwriting of Bach's granddaughter. Am I right?

Back to the top, to the beginning of this page

Next page of the "Ursprung" 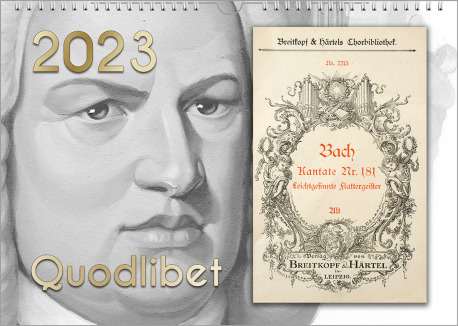 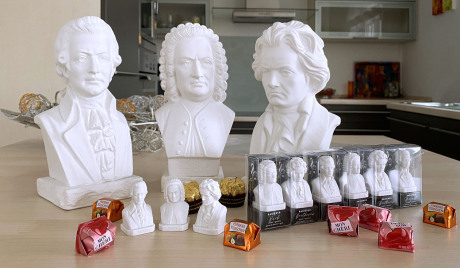