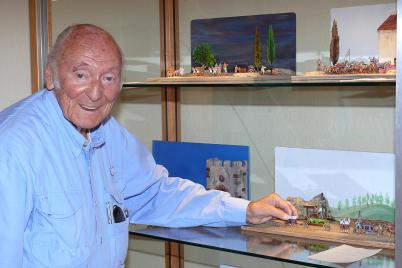 Peter Bach and his beloved passion: tin figures and that combined with the history of beer and history of fire departments. That is too, how I – how we – keep him in our memories.

Translation software. Am I Kidding You? Learn more.

Peter Bach – Sr. ( ! ), for me but he didn't like that Sr. that much  ... Peter Bach sr. ... died yesterday after a very long, fulfilling life. And like I have been creative and came up with unusual things for a lifetime – like this Bach project, for example – it just comes into my mind to honor my Daddy with something completely special. Peter Bach doesn't get just a wiki from me. The fact that it would be rejected because of the lack of relevance by Wikipedia editors is any way probable. No, Peter Bach is supposed to climb on Google to the top 10 worldwide. He should be found on the net, whenever a person is researching for him. Today and tomorrow and until the end of time. 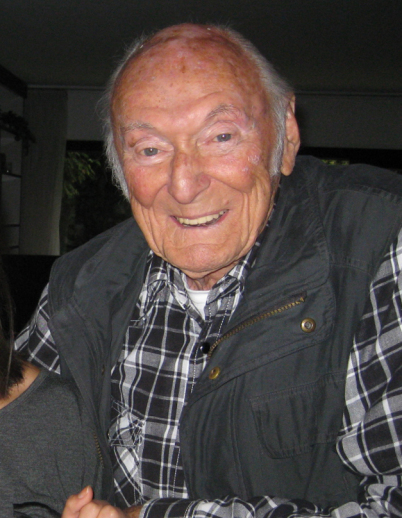 Peter Bach, Sr. – he deserves this place of honor and on July 7th, 2017, one day after his death, I make him an honorary member of the Johann Sebastian Bach Dream Team.

Three Bachs on a Cultural Mission 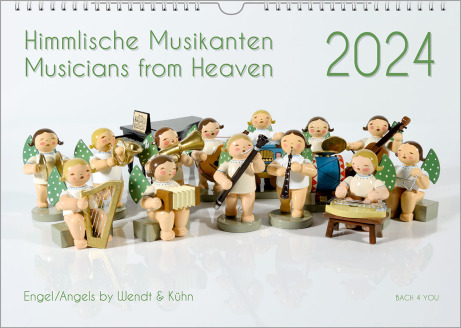 My Dad loved these angels. To the shop.

A Very, Very Personal Page on My Website To Honor My Daddy

So this page of my homepage has to do with the person who is and was closest to me aside of my wife Renate and my mother: this Peter Bach, who accompanied me for 60 years and now actually fell asleep with 94 years yesterday. That was actually never projected in my plans ever. Of course, I have expected his death for over a decade – suddenly somehow. But he left us a very long time to say goodbye to us in all possible ways. Since he is not living anymore, the thought of not wanting to grow old when it ends– for me – no longer applies. Measured by what others must endure and suffer, he didn't just have a great life, but including his farewell, he had a beautiful life – and that at its best. This Peter Bach. I leave him a very special and "out of the box" necrology. A necrology 4.0 so to speak. This Peter Bach. This Peter Bach, Sr., which he has been to me for three decades of cooperation. And six decades of being together. 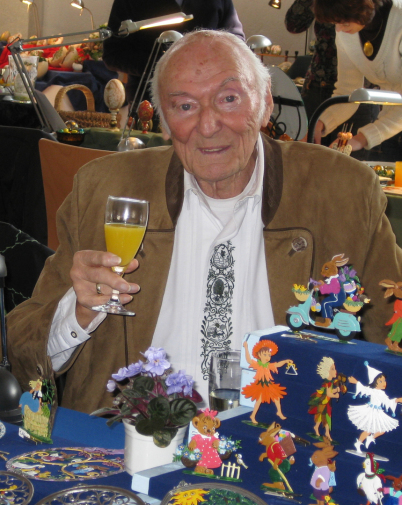 Peter Bach, Sr.: he was an autodidact, he was a rhetorician, I knew no better, he made his hobby a profession, and he paved the way for my professional life to my wife and me. Until the end, he experienced how several circles finally closed in 6 decades.

South Tyrol, Speeches, Slide Shows – Peter Bach, Sr. Was in Germany and Maybe Beyond the First on the Planet 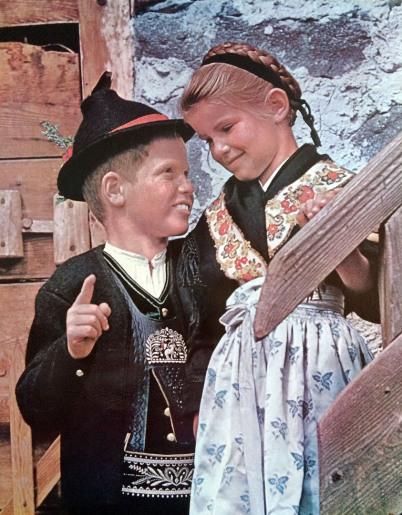 South Tyrol, Brauchtum (... old traditions), Peter Bach – this is how it fits 60 years ago, and so it fits today, and so it will fit into the far future! Photo: Peter Bach.

Peter Bach invented the slideshow – and hardly anyone knows it so far. Long after the war, pictures of light pictures were still special. Peter Bach filled the audience with the audience. Small halls in the country and the very large ones in the metropolises in Deutschland. Together with Volkshochschulen and newspaper publishers, who campaigned for such events and introduced people to the present-day holiday world after the war. Peter Bach photographed custom and nature. In South Tyrol, in the Black Forest, in Bavaria and above all, worth mentioning, also in Garmisch-Patenkirchen and Oberammergau. And Peter Bach loved music, popular music. He wanted to preserve them, and then preserved them. BASF sponsored a tape recorder, and Peter Bach made sound recordings. Wrote lyrics. He also spoke them himself and put them into the music mentioned above. The equipment, these works – these lectures – was the old magnetophone tape recorder, a gigantic travel speaker – infinitely difficult – and a simple slide projector. 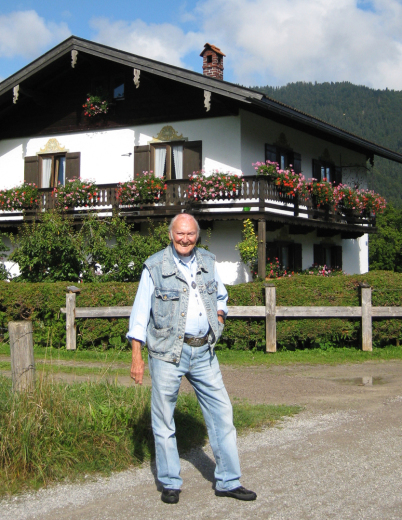 South Tyrol, Bavaria, Austria ... but the most consistent in jeans. Peter Bach, our boss, remains so in our memory. And that's good.

Peter Bach Invented the First Optical Trick Effect and Heralds the Nowadays Internet 4.0 – I am Not Serious with That!

Peter Bach invented it. Indeed. This with the predecessor of the Internet 4.0 is, of course, exaggerated. And I call him here so often Peter Bach, because I want to give him the right place at Google. For me he was dad, father, for us all he was also the Pebbels. Now ... he's no longer there. But not quite yet. Today is the funeral in about four days.

We have waited together for hours in the mountains, in South Tyrol, ideally on the sunset at the Schlern, with a marmot in the left foreground, a white on the right edge, the famous white cloud in the middle of the mountain massif. It was ... added. Even today, a good cloud is only a good cloud if it does not cover the sun. A good photo without sunshine – unthinkable for Peter Bach, Sr. – unbelievable for Peter Bach, Jr.!

Clearly, as a dwarf, I was dull at the time, and the marmot could look out of its construction, but after I moved, it came and gone. The second whistle comes from my father; it was the first whistle. He had to be content with the sunset, the white, the snakes and the clouds, and the photo was great. Without marmot. Great enough. 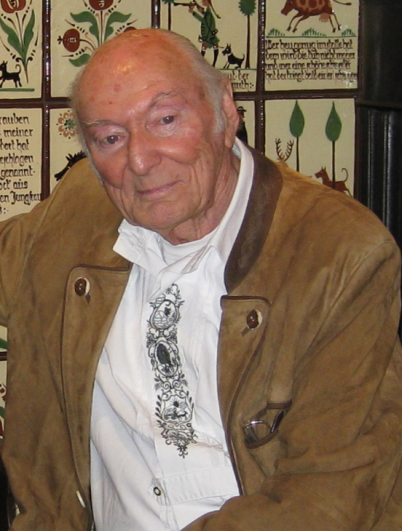 Peter Bach: He has turned his hobby into a dream-trap for two generations Bache – today Bachs! Thanks, Peter Bach or better thanks, Papi.

When do you photograph the sun? Not before you can look at them with the naked eye. And then you measure the exposure with an exposure meter still before that, then still common. Also, remember to have a film inserted and not exactly the position 36 in readiness and presses the trigger of an Exakta camera. It was this sun that inspired thousands of visitors to his lectures about 50 years ago, half a century ago. Peter Bach covered the lens of the slide projector – in front of the lens – and slowly closed his hand. From outside to inside, the image on the wall was darker, until at last only the sun "appeared on the canvas." And then extinguished. Autumn, it was in this picture with the sun setting, with shining foliage on beautiful trees. The music stopped, and it was dark. Some had already turned to what Peter Bach was doing on his slide projector. The "dimming" takes no 2 and no 4 seconds, but whole 30 and the darkening of the picture was initially not noticed by the audience at all. 2 or 3 seconds then everything was still. Although: the people whispered in the audience. A bright melody then sounded from the magnetic tape, and Peter Bach had meanwhile exchanged the slide with the other hand for the coming one. Automatically, it did not go long. With the sound of the first crystal-clear, bright sound of the following piece of music, he opened his hand in half a second, and a splendid panorama appeared as a deep-snowy winter forest, also in front of fantastic mountain scenery. 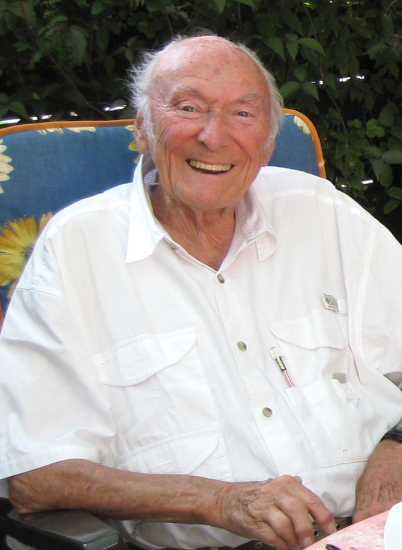 So you know him in Flein: kind, sympathetic, polite, charming: Peter Bach from the Parkweg, one crucial half of the "Dreamteam Ingrid and Peter Bach."

Winter time is lecture time, and so I accompanied my dad already early and often to such slide lectures. It began not infrequently with journeys over crooked roads into the Volkshochschulen between Karlsruhe and Stuttgart, between Würzburg and Munich. To learn from the Pieke on this job was the introduction of Peter Bach the Elder to Peter Bach the Younger: the correct winding of a cable drum. She had to be held diagonally, so that there was a proper wrap. And no cable, if the next one should start in 10 minutes. And the bulb in the projector had to cool down.

Next step on the career for the smaller of the Peters was the complete packing up of the equipment, while Peter Bach, who was announced yesterday in the local newspaper, had a lot of questions about the film location, the advantage of this opposite camera or – more importantly – with which time and aperture which impressive photo came, answered. 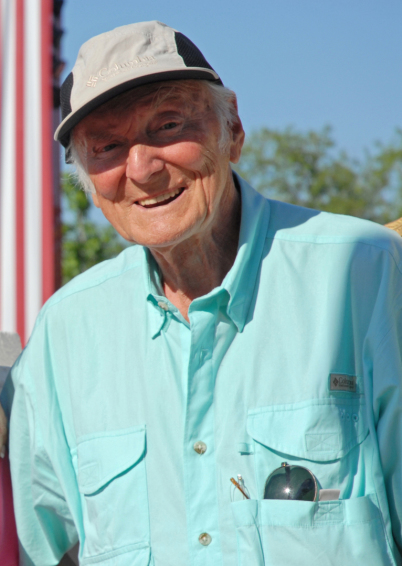 At least I should learn something serious; after that I can still participate. Peter Bach's opinion – not in the wording. It led to my diploma of the prestigious Lazi-Fotofachschule in Stuttgart and a military service in the press department of the 12th Panzerdivision (... 12th Tank Division)in Veitshöchheim near Würzburg. The latter was tolerable by the position. From then on it was a standard way. For over 30 years and collaboration of Peter Bach, Sr. Until the age of 83. Away from the slide to the electronics. Even now, we admire – the whole family – its tenacity to make new contacts and then to cultivate them. It was mostly not easy. For a long time, he also worked in the team with his sister-in-law Renate. She is, by the way, my wife, but you would have guessed it without my advice.

The End of All Speeches by Peter Bach

To be continued soon. 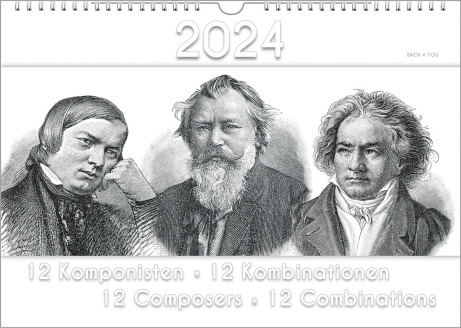 The music gift "composers calendar": Peter Bach, Sr. loved black/white ... do you otherwise know someone who has a consistently black/white living room? Only for this reason were flowers a just-so tolerated decorating no-no! This composers calendar, published in the publishing house of Peter, Sr. daughter-in-law, was just after his gusto. There are 33 Bach calendars. Three sizes. Purchase them in the current year or in the following. To the shop.