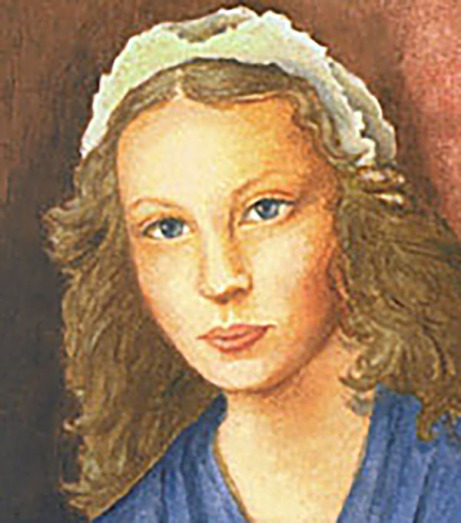 This picture is called "The singende Muse at the Pleiße" ("The singing Muse at the Pleiße") and in the right half of the picture two people are sitting at a table. It is said that Johann Sebastian Bach can be seen here behind a portable organ, and that his wife Anna Magdalena Bach is to the right. It is the only picture of Anna Magdalena Bach to which there are no (!) objections regarding authenticity.

The Anna Magdalena Bach Picture on the Internet

Anna Magdalena Bach. Much false information has been spread about Anna Magdalena Bach in the last 270 years. Here is the truth. It starts with the picture about her: It is dozens of times spread on the Internet, but it is definitely not Anna Magdalena Bach. In the "Bach world", this is well known, but on the Internet it spreads a thousand times over. And, that ... can't be stopped. I know that, because I myself make a very special effort to at least spread the truth about Wilhelm Friedemann Bach. In particular, the picture with fur and hat is not so widespread that it can't be deleted again: a project that may well take many years. So, this is not Anna Magdalena Bach. See for yourself how widespread several false picture is on dozens of homepages.
Next: Some publications – biographers of importance claim this – state that Johann Sebastian Bach only remarried because he wanted to have his household and children from his first marriage taken care of. Perhaps that would have been correct if Bach had remarried relatively quickly at a time when dying was even more the order of the day than it is today. At a time when the household and the childcare were a new challenge, he had never faced before. This challenge naturally became easier from day to day, because firstly, the children grew more independent with each passing day and secondly, each week after the death of Maria Barbara Bach, they got used to a different distribution of tasks. The urgency to remarry decreased dramatically with each month. Bach remarried as late as after 18 months. Moreover, it was a musician who was so good that she received almost the same salary at the Princely Court as he did. So if there were only two essential reasons to get married at that time and the reason was not the provision of household and children, then only other reasons could have led to it. And that means that Bach had either fallen in love a second time. Or that he saw in Anna Magdalena Bach a perfect life partner, because she was certainly at least likable to him and then also a hundred percent devoted to music.

Johann Sebastian Bach Has Not Left a Fortune to Anna Magdalena

Bach wasn't rich, and he didn't die rich either. Quite in contrast to Friedrich Handel, who lived at the same time. And he wasn't as famous back then as he is today. In addition, there was the fact that there was no GEMA (... a powerful society representing the financial royalties of musicians in Germany) at that time. In other words, neither Johann Sebastian Bach nor his wife Anna Magdalena Bach benefited when his music was played after Bach's death. Recently, a musicologist and musician discovered that Bach owned shares in a silver mine. But that doesn't even mean that he left debts "on the other side". Even today, anyone can "plunder" his or her savings account, buy shares from a gold mining company and still hardly own any money "at the bottom line". It is a fact that Anna Magdalena urgently asked the Leipzig Council for a pension for the poor - you hardly do that if you had enough money aside - but only received it for half a year. The belongings that Bach left in material assets is documented, and it can also be concluded from this that Anna Magdalena was not wealthy. "Relative poverty" is a popular phrase used to describe the financial situation of Anna Magdalena Bach after the death of the Thomaskantor.

The picture from above again: Now you see Johann Sebastian Bach and Anna Magdalena Bach better.

"The Little Chronicle of Anna Magdalena Bach" is one of the most successful books about Johann Sebastian Bach. Well, that's what many biographers are saying. This booklet is not a very serious biography ... but it comes very, very close to it. And what can you say about a particularly successful book if you have just written another biography about the master yourself? That's right, there are some small historical inflections. In addition Anna Magdalena expresses herself in a way she certainly hasn't been handed down ... but she isn't contradicted either. The British writer ring Esther Meynell sold many editions and large numbers: "It's particularly easy to introduce her to the life of the star composer. Entertaining, sweet, easy going ... that's what made the book so successful before its reprint - which many, many publishers commissioned - was discontinued. Today it is only available second-hand, but it is so good that my publisher "Bach 4 You" offers it as one of two Bach biographies, two out of 7,000 that are not published by this publisher. Esther Meynell's picture wasn't a decent one until recently, when my cousin, Briana Bach-Hertzog, painted one for my project "Bach on Bach". It's the next picture and below it there's a small, short video of how this picture was made. 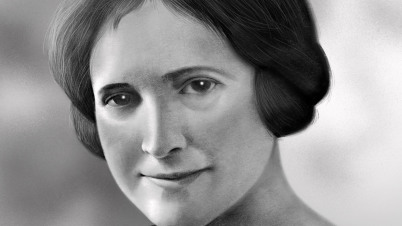 The little short video: Barbara Bach-Hertzog, a cousin of J.S. Bach who now lives in the USA, paints Esther Meynell, the author of the "Little Chronicle of Anna Magdalena Bach". 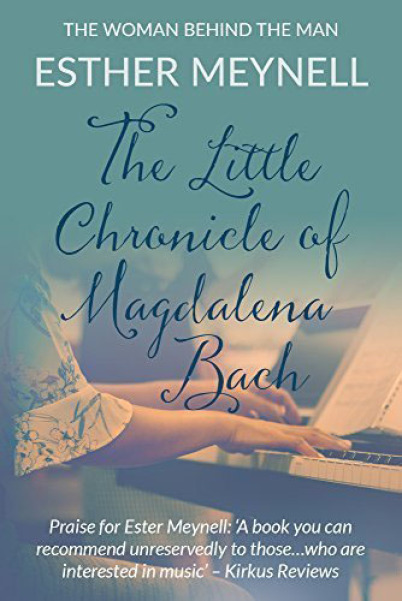 100,000s of copies were published by several German publishing companies. However, finally younger biographies replaced this more than successful book.

No, it's not her: This is not Anna Magdalena Bach (... right at the Google results with the entry AMB).

A Tribute for Anna Magdalena Bach

There is a tribute for Anna Magdalena Bach and you can find it as one of the Bach highlights in and around the Thomaskirche: It is a plaque in the Thomaskirchhof in Leipzig. So there are 7 Bach highlights to experience there: First, of course, the New Bach Monument, then Bach's grave in St. Thomas's Church. Next, the Bach window in the rear part near the organ, when we are already in the church, the Old Bach Monument, if you walk only 20 steps towards the green area or the main entrance of St. Thomas' Church, the Bach archive on the opposite side of St. Thomas' Church, the Bach shop a few steps down from the church and yes ... the aforementioned honor for just ... Anna Magdalena Bach. 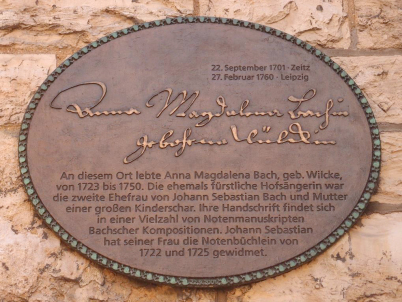 The tribute for Anna Magdalena Bach ... 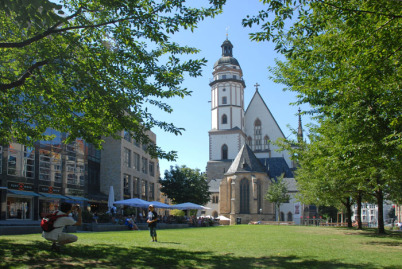 Seven good reasons for Bach fans to look forward to the Thomaskirche and the Bach highlights surrounding it. 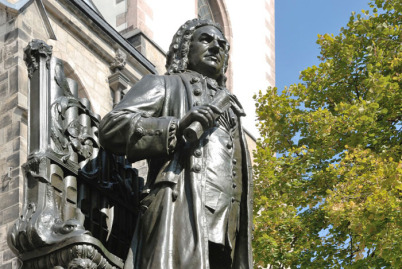 Bach figures and Bach busts in almost all sizes ... 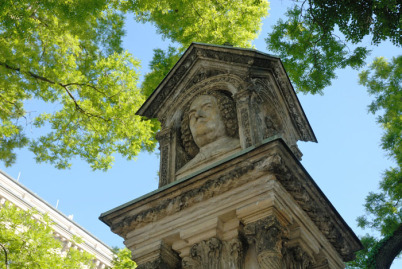 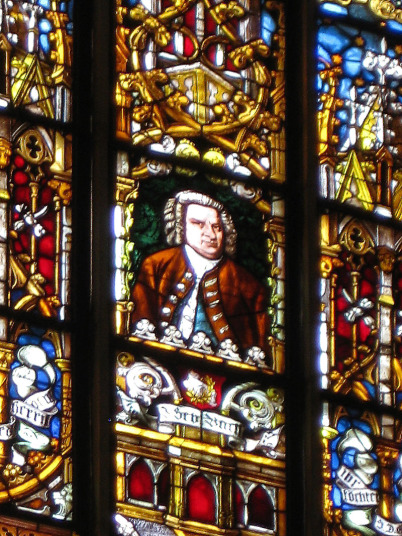 The Bach window in the nave, opposite side with the Bach grave, on the left. 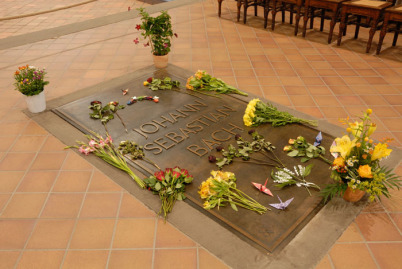 The grave of Johann Sebastian Bach close to The Lord's Table. 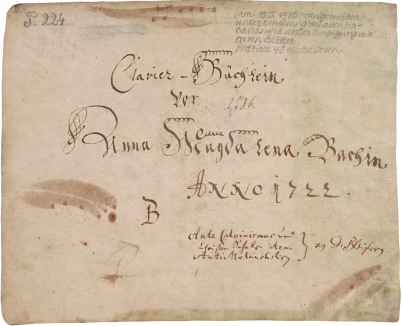 Anna Magdalena Bach in the FAZ

I am sorry folks, this whole newspaper article is not available in English. However, my recommendation for all those who are definitely interested: DEEPL a translation website delivers unbelievable results.

If you want to read the latest research results about Anna Magdalena Bach directly and immediately, you are in good hands with the daily newspaper "Frankfurter Allgemeine". Here it is presented excitingly that Bachs second woman was not at all responsible for house and family, but quite active as an entrepreneur. Here you come to the report.

The Thomasschule: Anna Magdalena Bach lived here for 27 years with her husband and many children.

For Bach fans it is a well-known picture of Toby E. Rosenthal, but ... You suspected it ... Anna Magdalena Bach is not authentically depicted here either.

It gets even worse as these two books only make sense for those of you, who speak and can read German.